I stopped in Puno out of necessity. Sure I could have taken a long bus ride directly to Copacabana instead, but it would have involved a transfer in Puno anyway. I decided that instead of having a transfer in the middle of the night that I would just take a night bus from Cusco to Puno and arrive in Puno at about 5AM.

The hotel I was staying at in Puno (Antonio Suites) sent a taxi to pick me up from the bus station so it was hassle free.  I was also happy to warm up with endless cups of tea while surfing the web as I waited for my room. They also let me check in early at about 8AM which I was very thankful for.

Right away they were able to book a tour for me to the Uros Islands, square away my bus ticket to La Paz, and send my clothes to a laundry service.  While there were a couple hiccups with the first bus ticket they gave me (my name being misspelled and having an incorrect destination written on the ticket), they fixed it without too much arm twisting from me.  Everything else about the stay was great and I highly recommend this hotel.

I had a chance to unpack, freshen up, and get ready for my tour to the Uros Islands!

The agency picked me up from my hotel, picked up a few others along the way, and dropped us at the harbor. Our guide then lead us to a boat which took us the 20 minutes or so to get to the islands. 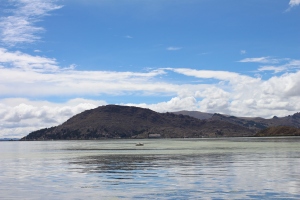 Once on the islands we were greeted by locals dressed in colorful garb. They demonstrated how they were constantly rebuilding the islands and showed us the items they bartered at the market (mostly dried fish).  Then they showed us the huts they live in (no heating or electricity installed in most places (though there was one solar panel on the island).

They called this boat the BMW of reed boats

After that they gave a hard sell to either buy some artisan crafts (needlework and knickknacks mostly), pay to dress up like a local and take a picture holding their babies, or to ride the “BMW of Reed Boats”. I didn’t participate in these activities. Instead I took some pics of the island and wrote in my journal for a bit. 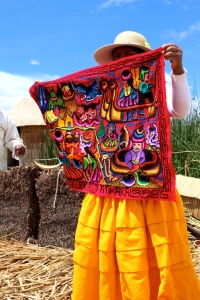 After the tour I dropped off my stuff at the hotel and went exploring for a bit. I don’t feel like there was much to see in Puno…so I had an early dinner and went to bed early instead.

Here are a bunch of other pictures I took while on the islands:

3 responses to “Puno and the Uros Islands (Lake Titicaca)”