Amsterdam and Budapest were the two cities that I felt most at home in.  I enjoyed Budapest the most because it still has old world charm, low(er) cost of living, its very walkable, has great public transit, and people were really friendly.  I was also very happy to be in Budapest because the two nights I stayed in Budapest were the first two nights I had spent in a hotel (ie. not a dorm room with 5-9 other people in it) and the night before in Bratislava was the worst night’s sleep I had ever had.  AND my fabulous friend Em was still with me!

The two of us dropped our bags at our hostel and immediately started walking toward the Chain Bridge from Pest to Buda’s Castle Hill.  Before we crossed the bridge we walked a bit passed it to see the Shoes on the Danube Memorial and then the gorgeous Parliament building.  Then we backtracked and meandered across the river.

Shoes on the Danube

After waiting for some friends to arrive (it turns out that they went to a different bridge!), we took the cable car to the top.  If we hadn’t done so much walking beforehand, we would have easily done the walk to the top of Castle Hill, but we decided to take it easy instead. 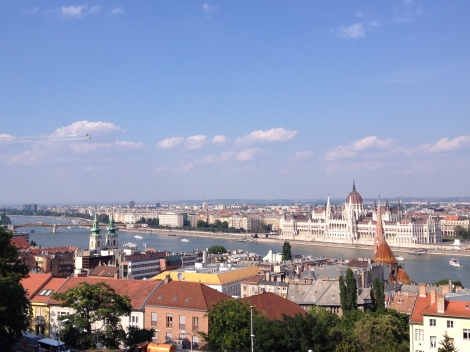 First we walked to Buda Castle which has amazing views!

Then we checked out Mattias Church which is just gorgeous from the outside.

Next we took tons of pictures at Fisherman’s Bastion.  This place just made me feel like I should be in Game of Thrones and that a dragon might arrive at any moment! I felt like I was living in a fairy tale.

We decided to rest our feet for a bit at Faust Wine Cellar which was inside of the Hilton.  I lost my flexible water bottle here! I wanted to do a wine tasting, but apparently you need to make reservations for that, so we each had one glass of wine instead! 😦 It is a beautiful place, but I wish it had more seating!

Wandering away from the other tourists was nice

The sun was starting to go down at this point so we just wandered around for a bit and enjoyed getting away from some of the tourists.

Finally, we finished our day on the town with another walk across the Chain Bridge and then some delicious pizza from a random place near our hotel.

Day 2: A Little of This and That

We had a leisurely morning and enjoyed the breakfast buffet at our hotel.  It was the best breakfast I had during the whole month I was in Europe! Bottomless champagne always helps too! 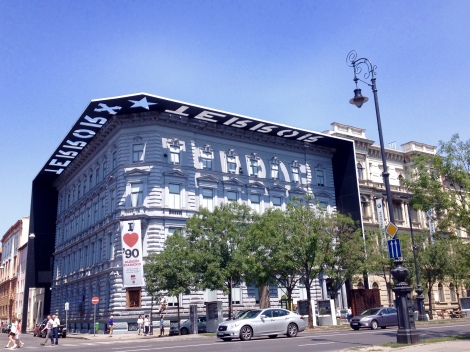 We went to the House of Terror Museum which was a big surprise.  I have been to WWII museums before, including one in Amsterdam just a week earlier, but this museum does a fantastic job of making you feel like you could have been there.  There were video clips, audio clips, a lard maze, and a dungeon to walk through toward the end.  One thing I really loved is that you could get a printed sheet about each room to reflect on later (or use with your classes later if you are a teacher like myself!).

After the museum, we took the metro over to Hero Square.  It was fairly empty with few tourists around.  However, we did see one of those drink and peddle trolly things which had a large group of people drinking and loudly singing American pop music. I could have done without that.

From there it was an easy hop over to Szechenyi Baths.  There are about twenty different baths to choose from, but none of them were as hot as I wanted.  The steam rooms were another story!  A few minutes in one of those babies and you are sweaty! It was fun playing in the whirlpool and just people watching here. 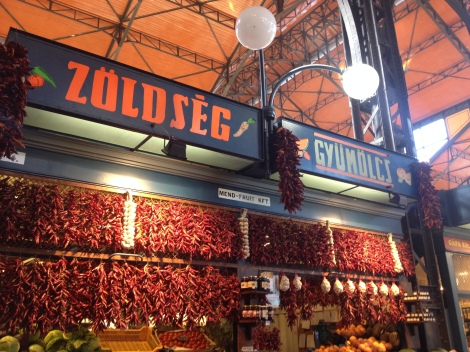 Apparently Hungarian paprika is a thing, but I didn’t get any because I never use it

Next, we took the metro and tram back toward our hotel to the main market hall to look for souvenirs.  Paprika, lace, and lots of other factory produced souvenirs abounded here. I wanted to get some fresh fruit, but because it was half an hour before closing time when I went, the fruit vendors were already packing up and were uninterested in selling to me.

We finished our day with dinner and gelato shaped like a rose: 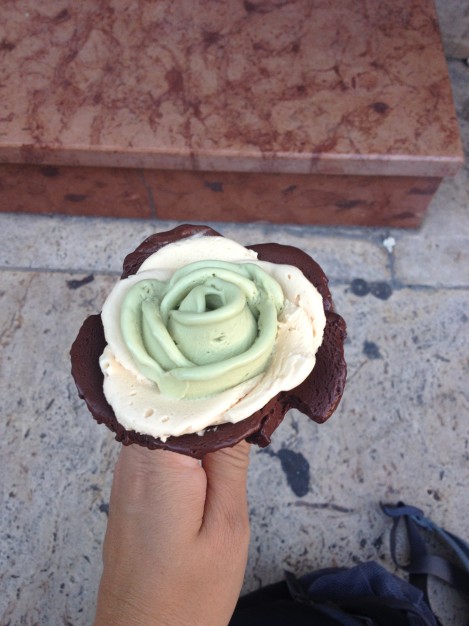 Gelarto Rosa has amazing gelato- I had pistachio, (don’t remember the white one), and spicy chocolate

I really wish I had had more time in this city, but perhaps one day I will be lucky enough to teach at the international school there and I will have plenty of time to explore!

Please comment! Have you been to Budapest? Did you love it or hate it? Would you go again? Did I miss anything that you absolutely loved?

2 responses to “Two Days in Budapest”