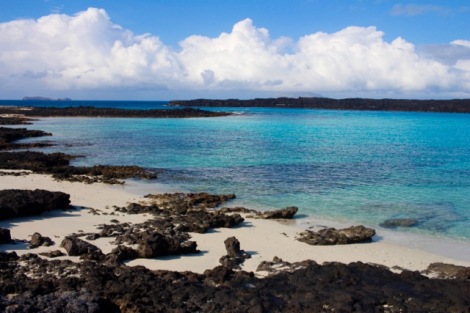 I was sad to know that this was my last full day in the Galapagos. 😦

On this day we veered a bit off of the itinerary I was given. According to the plan that was given to me 6 months before the trip we were supposed to be at Eden Bay and Dragon Hill, but our guide told us right away that it is always up to the Captain what we will do that day. Some places need prior registration to go to because only a certain number of people can be there, but others are more accommodating of groups. He said that the plan for the day isn’t final until the night before. 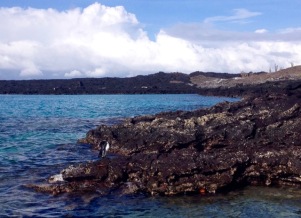 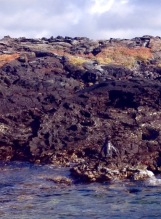 I think they changed the plans because we hadn’t seen any of the Galapagos penguins. So we headed out a bit earlier than usual and quietly crept along the edges of Sombrero Chino and FINALLY found ONE Galapagos Penguin. It looked like a small penguin and it wasn’t doing anything exiting, but I was happy to see it!

So on this day, we went to a tiny island called Sombrero Chino. It is supposed to look like a Chinese Hat but it really looks like more of an upside down cereal bowl to me. Meh. There were a bunch of volcanic rocks, some succulents, lava lizards, marine iguanas, and the ubiquitous sea lions. It is also supposed to have some intact lava tunnels. One of the guys in our groups was encouraged by our guide to lie down in a small lava tunnel! 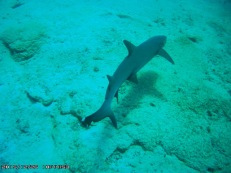 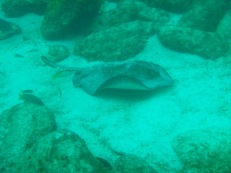 After a quick change into a bathing suit and my handy rented wet suit, we went snorkeling near Sombrero Chino. We saw 3 white tipped reef sharks REALLY close and a manta ray. I did see a Garden eel but it was too difficult to catch on camera.

I just have to say how happy I was to be able to rent the wet suit (snorkel, mask, and flippers were included in the cost of the boat) for a week. It only ended up being about $2-3 dollars per hour of use. It kept me warm, protected from the strong equatorial sun, and protected from jellyfish!

I was really tired after lunch and almost slept through our last snorkeling trip, but thankfully the guys on the boat knew how much I loved sea turtles at this point, so they sent someone back for me. I got there in time to swim with two sea turtles and another small electric blue colored fish. But the best part was that a sea lion was feeling lazy and hopped into our dingy! I wish I had taken a photo but I was just so startled all I could do was stare!

Walking up to Cerro Dragon

I think there were exactly four flamingos there

We quickly went back to the boat to rinse off before donning our dry clothes and headed to Cerro Dragon. Sadly, Dragon hill was not covered with dragons, but there were several large orangey fat land iguanas. The landscape was nice with a bit more greenery than Sombrero Chino and instead of the flatter hill on Chino, there was a conical hill and a brackish lagoon with a sprinkling of flamingos. 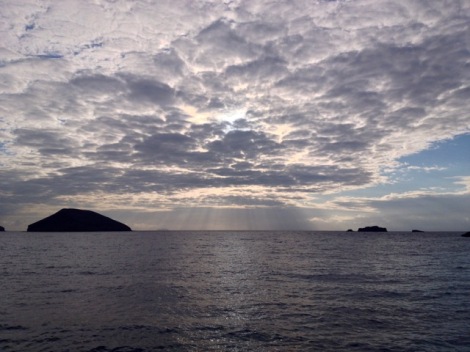 Last sunset in the Galapagos

It was a lovely last full day in the Galapagos!