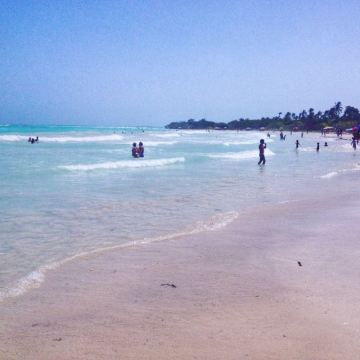 This month was pretty peaceful and pretty uneventful.  While we did have Carnival, it is pretty uneventful when you stay in Venezuela like I did. Two years ago I went to Carnival in Trinidad and that was amazing, but Carnival here pales in comparison. We went to Chichiriviche and while they had an amazing malecon (boardwalk) with a DJ blasting music, it was not dissimilar to other weekends I’ve spent at the beach (though usually the music is coming from cars randomly parked on the side of the road instead).

I also had fun watching movies nominated for Oscars this month.  Leo has to win for The Revenant right?!

I am getting more and more worried about an impending economic collapse here in Venezuela in the year to come.  It seems like every day there is a new article discussing what Venezuela will be like when they default on their loans.  With people in charge denying the existence of inflation,  Zika virus running rampant, and Caracas recently being declared the most dangerous city in the world, Venezuela doesn’t look so hot.

I read this article on Valentine’s Day (called Single’s Awareness Day in my house!), about the idea of marrying someone for their resume rather than attraction.  I’ve heard rumors of international teachers doing this to become one of those much sought after “international teaching couples”, but according to the poll on that article, it looks like normal people would marry for a resume too!

“The Girl from the North” is the first fun new fantasy book in a series called “Pathway of the Chosen”. It was another book I found for free on Kindle Unlimited.  I love the character development and strong female lead.  Bronwen is a woman with a mysterious path and many tough choices in store for her.  I am looking forward to reading other books in this series.

The Revenant has my vote for best lead actor and cinematography! Leo did an incredible job in this movie and I had to keep reminding myself that he was just acting. So intense.  And that BEAR SCENE! wow.

Scandal is back on y’all!  You know what I am watching Thursday nights (well, really on Friday since I have to stream it).

Also, The Amazing Race is back on! Does anyone else think that international teachers would be perfect for this show?!