I went through 700bs of saldo on my cell phone in one WEEKEND because I didn’t have internet access.  I did read three books during this time which is always good, but I needed it fixed ASAP.

Finally, I gave in and asked the tech guys at my school to have mercy on me and take a look at it.  They finally took a look at it after a week and a half without internet.  What they found was shocking: someone had CUT my cord! 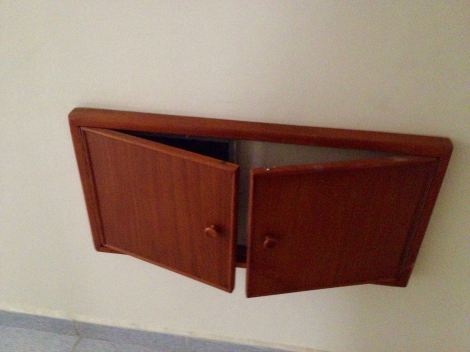 You see, in my apartment building, everyone’s internet is routed through this one box that is held in the hallway of my building. Anyone has access to it because it isn’t locked.  I didn’t really think too much of this box because the doors are always closed, but after they told me what happened I had to see for myself. 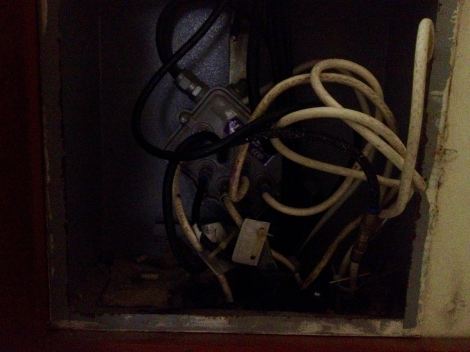 Hard to see the all the dust in the poor lighting, but rest assured that these wires are covered in it!

It is a mess of old dusty wires everywhere with little tags labeling each apartment’s internet cord (don’t really know what this cord is called- coaxle cable maybe?). I think it could use a serious spring cleaning, but I don’t think I should touch anything. hmm

I’ve asked the school liaison to talk with the internet company for me to see if she can find anything out. For now, it looks like my cord is held together with tin foil….

Notice the shiny stuff in the center? Pretty sure that is tinfoil holding my cord together!

I would really like to know what happened… and I hope that someone isn’t targeting me because I am an expat.  I’m a kinda worried about what they find!

Comment below: Have you ever had anyone cut your wi-fi service without warning or provocation?

2 responses to “Internet Problems in Venezuela”