As I am preparing to go to the Dominican Republic for my Spring Break/Semana Santa vacation this year, I am looking back at last year’s Spring Break in Curacao. I hope the beaches of Punta Cana can compare!  Wish me luck with my flights!
Here is my journal entry from my blog/journal last year about Curacao:
4/2/2013
I left Ojeda at 5 AM. We were supposed to fly out of Maracaibo at 8 AM… but our flight was cancelled! So, people went kinda crazy and jumped over the counter and started yelling at the DAE staff.  I found a teacher I had met the weekend before at the EBV St. Patrick’s Day Pub Crawl, so I brought her over so the three of us could try to get someone to translate all of the rapid Spanish for us.  It turned out that DAE didn’t have permission to land in Maracaibo.  So we talked them into letting us stay at the Maruma hotel until the flight came. We thought we would be able to spend a whole night at this wonderful hotel, but they called Eden’s cell phone and sent us back to the airport for a 9 PM flight.
The only problem was that it wasn’t a direct flight. We had to spend the night in Aruba in a crappy hotel. The view from the hotel room was some kind of wrecking yard. We didn’t see the beach at all. We left the next day at 9 AM for the airport. The airline gave us food vouchers.  We got to Curacao Sunday afternoon.

We met up with our AirBNB host, Anna.  She took us to her adorable house about five-ten minute drive outside of the Punda area.  We were always able to find it earlier because it is near a famous bar/grill called Larry’s. We found that another place called the Rib Factory was WAAAAAYYY better, only slightly more than the 2 for 1 special we got on Tuesday, and was only two doors down from the house.  Despite only having AC in one room, cold water only (room temp rather), and tons of mosquitos, I would stay with them again. Her and her husband Hubert were nice, informative, picked us up from the airport and offered to drop us off, and they let us use their snorkeling gear for free.

We basically tanned, swam in the ocean (I like it SO much better than the pool), cooked our own food and occasionally went out to dinner. Like I said before, the Rib Factory is amazing and Chopstix was pretty good for sushi even if it was overpriced.  Most of the time I cooked for myself using ingredients from the cheap grocery store across the street from the house we rented.
We went to tons of beaches, but my favorites were Playa Porto Marie, Playa Kanepa Grandi, Playa Cas Abou, Playa Kanepa Chikiti, and Playa Kalki (in that order). Los Cayos in Venezuela were the same if not better because there are less rocks here. 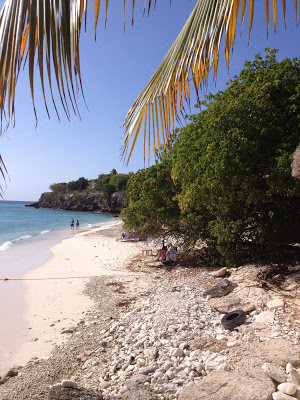 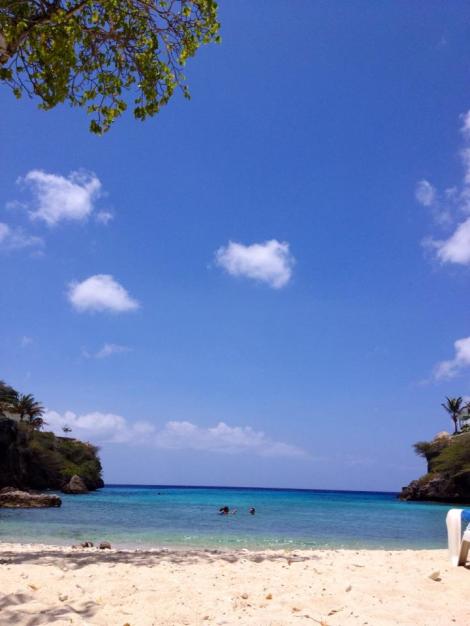 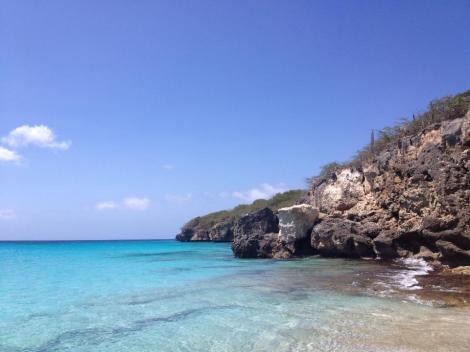 Love the color of the water at Playa Kanepa Grande

On the way off the island on Saturday we had troubles with DAE again. They said our flight was cancelled and only told us this when we got to the airport.  At the airport they said that there was for sure going to be a chartered flight straight to Maracaibo on Sunday. Then they sent us to a crappy hotel called the Academy Hotel where they train hotel staff, we found roaches, cold water showers, malfunctioning AC, small hard beds, and crappy food.  It was free and better than the airport floor I suppose.
The next day we kinda snuck into the taxi back to the airport and argued to be switched to a better hotel while the airline fixed our situation. They said we might fly out that night. We checked with all of the other airlines, cried, yelled a little, and talked to the manager. Finally they put us at a wonderful all inclusive resort (they even paid for our alcohol as well as our food) along with a new friend we met along the way.

Sunset at the all inclusive Sunscape!

2 responses to “Beach Adventure in Curacao”