I kept a journal while I was in Azerbaijan as a Peace Corps volunteer ESL teacher. We didn’t have internet unless we went to an internet café, so I just spent a lot of time writing. Before moving to Azerbaijan I had never heard of it. Also, if you were to search now, you wouldn’t find very many expat accounts from that country.  I will try to put together some interesting bits of info that other travelers might find relevant.

One of my favorite things to do other than dance salsa is to EAT.   My first post about Azerbaijan will be about the food I had while I was there. 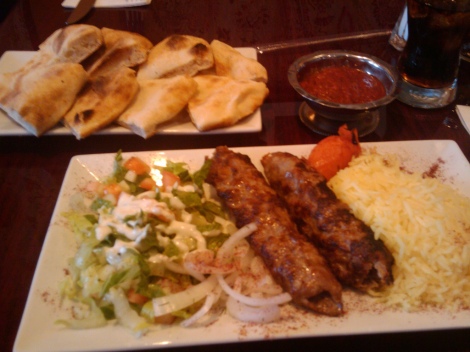 My first comments about food in Azerbaijan are from June 29, 2007 while we were staying at a hotel before being placed with a host family:

“The food so far at the hotel has been really good.  The produce is really fresh and reminds me of Italy with all of the tomatoes they have here.  The cheese tastes like feta which I love.  So far we have only had mutton which I actually like but it always gets stuck in my teeth which I don’t like.  Oh well.  The food isn’t too greasy.

The weirdest thing I have encountered at the table is that for each meal there is a small pile of fresh herbs like green onions, cilantro, tarragon, dill, and something that might be licorice leafs that people just eat alone.

Tea is served with every meal and at the hotel they give us yummy peach nectar but we were told that for nearly every meal with the host family we will drink the same kind of tea.  We have to boil milk, water, or drink stuff out of cans and bottles.”

“At the traditional tea shop we had some tea (while sucking on some strawberry jam), and a meat kebab that came with cheese, bread, and a BBQd tomato.  I like my tea without any sweets, but I tried it like my teacher suggested with the jam.  The jam gave the tea a berry flavor that I found unnecessary, but I can see how a change of flavor would be nice if you have the same tea with every meal.

I really like the food here so far but I am worried that all of the bread that is served with every meal will make me gain weight like crazy.“

“A large round of white bread is the main dish for breakfast and a large component of the dinner meal as well. At breakfast it is served with a dry, hard, and salty white cheese and jam. At dinner it is served to mop up grease and any extra flavor left on the plate.”

“All of us want to at least be able to drink wine and I’m not sure how well that will go down with our host families.  Our teacher says that wine at the celebration will be fine because Azeri’s drink wine on holidays even if they are females.  Women here are really only supposed to drink wine and champagne if it is at a wedding.”

All of the wine I secretly tried in Azerbaijan was red and very sweet…like desert sweet. As someone who likes a nice dry Cabernet, it took some getting used to.  We volunteers would buy it in a different town, hide it in a bag, sneak it into our bedrooms, and then drink it behind closed doors.  Women were not supposed to drink alcohol in the communities we stayed in.”

My favorite dish was Chicken Plov (toyug plov)- at the bottom of a large pot are chunks of chicken on the bone…and a lot of oil.  Rice is on top of it as well as some herbs like saffron.  My host mom always used dried apricots and raisins and walnuts to top it off.

Baklava– My favorite dessert was baklava.  Covered in honey and layered with hazelnuts, walnuts, or pistachios with a hint of vanilla and cinnamon, they were perfect for my sweet tooth! I liked them so much that I started making my own baklava when I returned to Oregon!

Khachapuri- This is not an Azerbaijani dish (its Georgian) but it is easily found in Azerbaijan and I still remember the decadent cheesiness of it.  There have been many occasions that I have looked up a recipe to make it myself, but the calories and ingredients usually convince me that I could do without it.

Dolma– a mixture of lamb, cinnamon, rice, and other spices wrapped in grape leaves or cabbage (kalem)

Tomato/Bell Pepper/Eggplant Dolma– same dolma mixture stuffed inside of a tomato, eggplant, or bell pepper.  It had the potential of being very good, but somehow always ended up being extra greasy when it was cooked this way.

Pomegranate (nar) – These seemed to be growing everywhere I looked.  They were tasty, cheap, and easy to find. 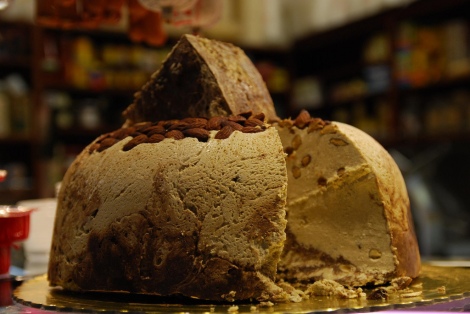 Halva– a sweet crumbly sesame seed block.  My host mom would slice it up and eat it along with our tea in the afternoon.  As far as I could tell it was only sugar and sesame seeds.  I have also heard of sunflower and pistachio seed halva.

3 responses to “Food in Azerbaijan: My Favorite Things”