I was reviewing my “Travel History” page and I realized that I hadn’t really blogged about one of my favorite cities in Asia: Shanghai.  I found a journal entry from a few years ago when I traveled to Shangai that I wanted to share.

I have decided that I could definitely move back to China and teach at an international school there … IF it were in Shanghai.  There are many reasons that I would consider this to be an ideal city for me to live in, but what it really comes down to is that the salsa scene is great! 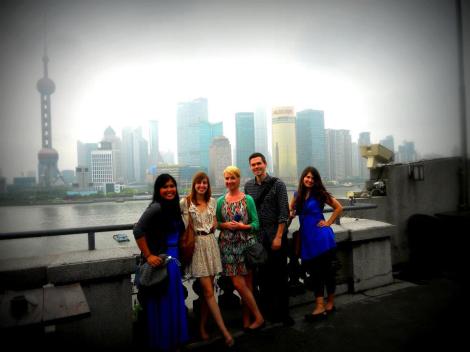 A view from M on the Bund

Whew! I feel like I am finally recovered from Shanghai!

First I will tell you about my trip:

I went with five other teacher friends from my school and my friend’s fiancé who was our token male on the trip.  We took the 5pm bullet train from the Beijing South train station and arrived at the train station next to the Shanghai airport at 10pm. It was a fun ride with wine, cheese, crackers, snacks, and lots of seat swapping and chatting. It was much more fun than just flying there for four times the cost.

We quickly found our hostel, checked in, and met up to see if we could meet Anna’s friend at M1NT which is supposedly one of the hottest clubs in the area. The only problem was that we didn’t have a reservation or the correct clothes as we had all just come from working and traveling all day.  So we went across the street and ate at a local Chinese place. I had some delicious Mapo Tofu and this cool bread box thing that had butter and ice cream on the inside (nobody remembered ordering it but it was fun and tasty), I passed on the battered and fried shrimp that were covered in wasabi mayo.

We spent the next day shuffling around Suzhou and visiting the Humble Administrator’s Garden.  We had some amazing steamed buns on the way from a random hole in the wall restaurant.  Thankfully our token guy is serious about studying Mandarin and was able to easily order for all of us.  We ate our buns on a 30-minute boat ride through one of the canals.

A view from the boatride on the canal

While our day in Suzhou was beautiful and sunny (perfect weather for Indian food and margaritas in the sun) Sunday in Shanghai was rainy!  Ashley, Doreenda, and I went for a walk around the Bund and had coffee at a place overlooking the Pudong skyline, all the while you could barely see the buildings across the way.  We then met up with Anna and Jeff to have brunch at M on the Bund, which is a classy restaurant with delicious food and a wonderful view (if not for the rain and fog).

That day we tried to go to the Antiques Street and instead ended up in the Cultural Street.  I bought some jade “lucky cloud” earrings and a weird fruit that I lost before I got to try it.  We also stopped at a cool historical building to have a drink (and flowering tea in my case) while we decided where to eat. We went to a place called Boxing Cat Brewery for dinner.  They had delicious fries and drinks. The texture of my pulled pork sandwich was great but the sauce just doesn’t compare to Russell Street Bar-Be-Que.

I was really happy to finish the night (after having learned the cup game with Ra) by going salsa dancing on my own! It was the perfect solution. There is this area of Shanghai called Xintiandi which is like Beijing’s Sanlitun where all of the ex-pats hang out. It is clean, well lit, modern, English signs, English restaurants with English speaking servers, and (unlike Beijing) there are many taxis who will actually take you where you want to go at the end of the night.  My friends went there to drink and I went to a club called Brown Sugar to dance!

Brown Sugar is a great place. There is a nice sized dance floor with many people available to dance with you.  Unlike Beijing salseros, the people I randomly met in Shanghai were very friendly! I was immediately asked to dance, I met a member of the salsa band that was playing, and people told me to go to Mural the next night.  The only downside of the night was the drunken guy that deliberately stepped on my purse which had my Ipad and Nikon camera in it, but after quickly running out of the club to check if they were okay I was mollified to note that they were fine and I was ready for bed.

Monday morning we lost three of our friends because they wanted to get home in time to go to a music festival.  Shanna, Anna, Jeff, and I met up in the Art District for brunch at a super cute restaurant and a day of shopping. Three of us got massages and we all loaded up on some DVDs. I was really excited to find 100 classic children’s books recorded and made into DVDs. It will be a great addition to the listening center in my classroom!

We were finally able to meet up with Anna’s Shanghai friend T while having sushi for dinner.  He told us about a house party one of his friends was throwing but I didn’t say anything because I knew that I would be going to Mural for another night of salsa!

The others convinced me to go straight to Mural (now closed) with all of my purchases, old makeup, and without my awesome salsa outfit and proper dance shoes.  They were able to convince me to do this by saying that they would stay and have a drink and watch me dance for a while.  I had a chocolate drink (YUM!) while I waited for people to show up and checked my bags at the bag-check counter for 10RMB.  I asked the DJ when people would show up to dance and he was right when he said that they show up between 9:30-10 because it suddenly went from nearly empty to packed!

While it was still around 9:30 I finished my drink and Anna made me ask a couple guys to dance.  I was really happy when one Chinese guy asked me if I wanted to dance LA or Cuban style and was actually able to deliver when I requested Cuban!  After 10 o’clock came around and I found out where all the Latino people hung out I didn’t have a problem finding a good dance partner. I met a Spanish guy who bought me a water and tried to get me to leave with him (he couldn’t dance though…so I just said goodbye when he left) and a Venezuelan, who was also a great dancer, who asked me to go on a date with him the following weekend and was quickly crushed when I told him I was leaving Shanghai in the morning.

I left Mural at two when the AMAZING band left (after they played two of my favorite songs Ai Se Eu Te Pego and Yo No Se Mañana) and met up with the rest of the gang who was just down the street (after a failed attempt to convince me to leave at 1:00) at the Shanghai Brewery (I think).  I don’t drink beer but the water was nice! I called it a night and rounded up the others around 3:30.  It was my best night in Shanghai!

We got back to our hostel around 4 and made a plan to wake up at 9:30 so we could have some famous soup dumplings for brunch in the morning. Sadly, by the time we made it to the dumpling place it was too full (because it was an official Chinese Labor Day holiday so everybody was out and about) so we ended up eating normal dumplings at the train station. Apparently, there is a Beijing branch of the famous dumpling place just down the street from MOMA where Anna and Shanna live.  Maybe I can go there later this month.

We all slept off our late night of dancing on the five-hour trip home. I wish I had spent more time in Shanghai!