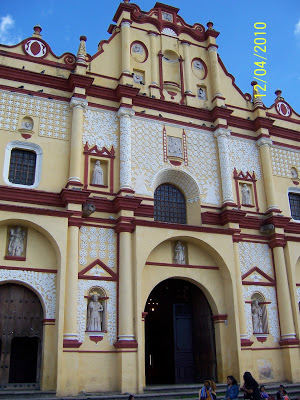 The main cathedral in San Cristobal

For this Flashback I wanted to highlight one of my favorite places in Mexico: San Cristobal de las Casas, or as we liked to call it: San Cris. San Cristobal is a gorgeous little colonial town that I would love to retire in one day.  It was my first colonial town and it ruined me for all others (though Cartagena Old Town comes close)!

Here is a journal entry from December 4, 2011, as I reflected on my third trip to San Cristobal:

We left our apartment in Tuxtla Gutierrez at about 8:30 am and caught a taxi to the OCC bus station. Catching a taxi isn’t too hard. I spotted one about to speed by me and I half-heartedly lifted my arm to summon it. I was then surprised to see it cut over two would-be-lanes of traffic (no actual lines to separate lanes here) then reverse on the one-way road so he could reach us quickly.  He charged us 40 pesos to go to the bus station.

At the bus station, we had to wait nearly two hours before there was a free bus. We were one of the first ones to board and we were able to snag the first row of seats! Then it was a quick 70 minutes or so to San Cristobal de las Casas.  I slept most of the way but poor M. couldn’t get to sleep.

It was easy to find our way to the main plaza with a map we got from the bus station. We chose our hostel based on location. The hostel is called Hostal Posada Mexico.  Their main location is really cute with a large courtyard, free wi-fi, and free breakfast but it was 90 pesos per person for a night in a dorm that had about 12 beds in it.  I might have been willing to pay that but the girl working there piped up and said they had a satellite location around the block that was only 80 pesos a night.  This dorm only had 5 beds in it. We took it!

I love staying in hostels because I always meet the most interesting people! Last night we met these two girls from Denmark. They said they were near the end of a 4-month backpacking trip around south and Central America. After talking with them I decided that I should try to work in the EU and marry a European guy! Hahaha! I loved what they were telling me. Despite paying 60% tax on their pay they were still happy to pay it because of all the great social services and way of life. They said the health care system is amazing there (and free) and that students get paid to go to university. They said that the cost of living is high (a gallon of gas would be about $12) but that the pay is equally high and they are building a bike highway to offset the cost of gas. I would work at the school in Copenhagen in a hot minute!

We had great food at a place called TierrAdentro. We ate lunch when we first arrived and breakfast this morning (because La Selva Café wasn’t open yet and we had already been to Casa del Pan so many times ). It has a really cool atmosphere here!  I was able to buy local, organic, fair trade coffee at this place too.

Eating at La Paloma was a definite highlight. If anyone comes down for a visit remind me to take you here. It was a little pricey for my budget but it was creative food that I couldn’t make at home. I had squash flowers filled with cheese mousse and served with huitlacoche (black corn fungus), a side of tortilla soup (not as inspiring), and two glasses of delicious wine. It ended up being about $20 US dollars.  The ambiance was amazing AND later that night they were supposed to have salsa dancing. 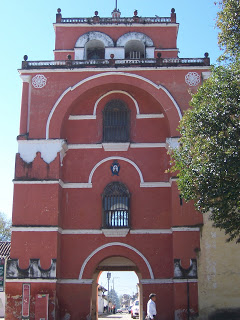 Arco de Carmen (happy that I could crop out the date!)

Note: So far, the best place I’ve found in Chiapas to go dancing is called Perfidia in San Cristobal.  They have an amazing live band and when I went there was no cover charge.  Just be sure to get there early because the band actually started playing at 10:30 (though it did continue until 3:30), but that is an early start time for Mexico.

After lunch, we randomly stumbled into a parade for the Virgin de Guadalupe. A live band was playing in the back of a truck. People were randomly letting off fireworks into the air. Everyone was cheering and honking their horns. I was happy to walk past the parade to avoid the horrendous noise and continue to the church. 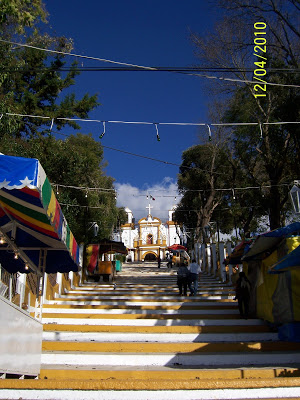 San Cristobal has a fabulous central market where I was able to buy all of the Christmas presents I was looking for. The leather bags here are beautifully detailed and very affordably priced. I bought a handmade leather purse for myself for the equivalent of $10 USD. I also bought two hand woven scarves and had the vendor sew them together so that I could have a festive blanket. Amber is also easy to find here so I bought myself some gorgeous earrings. Be sure to stop by the market if you come to San Cris! 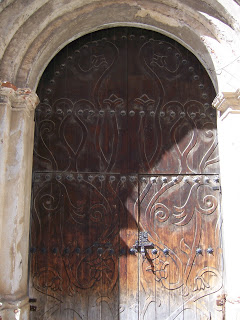 Beautiful door that I found in San Cris (one of many)

Of course, we also had to stop by our favorite eatery called Falafel. They have really cheap made to order falafel sandwiches with fresh hummus. I like their limonada con hierba buena (mint lemonade), but this time we had a nice warm cup of chai tea with it.

Sadly, our time in San Cris had to come to an end because we had to work for a few hours at the school fundraiser so we caught the bus back at 11 AM.

Please comment below! What is your favorite colonial town? Have you been to San Cris?