Lots of people wondered why I went to Bruges instead of Brussels. The main reason I chose Bruges is that everyone agreed that it is very walkable and that it could be done in a day while Brussels would take at least two days to see the top sites.  Since I only had about five hours budgeted for a day trip, I chose Bruges.

I arrived on an early train to Bruges and the tourism office was closed. Nobody at the train station could give me a map and there were no signs posted for tourists to follow. Thank goodness for my over-planning I did before I even arrived in Europe. According to my notes it was a quick walk from the train station into town if you just crossed the street and entered what looked like an ordinary path in the park. So I walked that way and lo and behold, I saw a sign that vaguely sounded like “center” so I went in the direction it pointed.

At the end of the path was a tourism center that was actually open so they gave me a map and circled the things I wanted to see. The only problem was that it was really pouring down rain at this point and I was freezing cold (remember that I live ten months of the year in a hot tropical country).  So first I had to stop at H&M to get a long sleeve shirt and scarf to wear with the light rain coat that I had brought with me.

Thus outfitted I made my way successfully into town.

In Bruges I had my first real Belgian waffle- yum! And of course, tons of chocolate!

This waffle was embedded with little sugar chunks, delicious, but certainly not a diet food!

My favorite chocolate was from this tiny little shop that I just wandered into when I got lost, but I forgot to write down their name.  I also got 250 grams of chocolate from the famous Dumon Chocolatier which was pretty awesome too (though the staff was not very friendly- at all).

Even if you don’t like chocolate you should still see their central shop just off the square- so cute!!

While I was most excited to try the chocolate and the waffles, I think many people come to Bruges to see the canals and the famous Belfry tower.  While I did climb the 386 steps to the top of the tower (and was lucky enough to be up there while the bells were playing), the view wasn’t so great through the rain and clouds. 😦 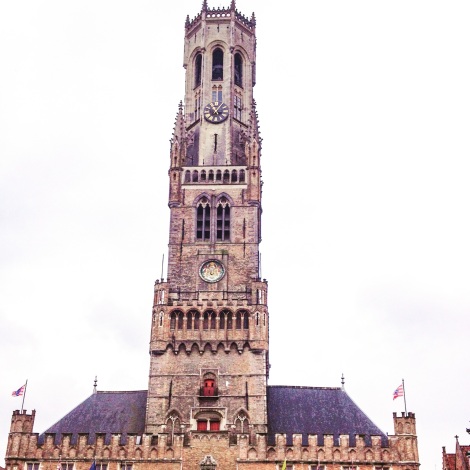 A view from the top of the Belfry

The historic center is a UNESCO site, and you can see lovely buildings everywhere you look: 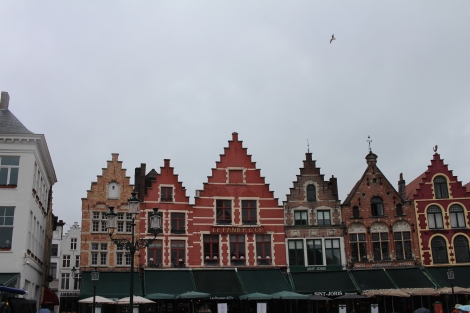 Eventually the rain let up for a bit and I felt brave enough to take a canal tour. I almost made it through the whole tour before it started raining again! 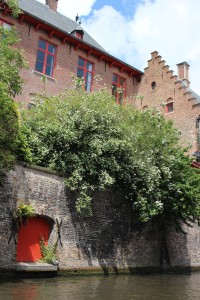 As I headed back toward the train station I did a quick pit stop at the Church of our Lady to see the “Madonna and Child” by Michelangelo. I’m not religious, but I could immediately tell which was the famous statue because it just seemed to glow with beauty.  Be prepared to pay a little extra to see the beautiful statue though!

The Madonna and Child by Michelangelo

As I raced for the train station (I made it to my train only a few minutes before departure!) I ran through a beautiful park.

Bruges was a lovely city, and I only wish I had had a bit more time there!

Have you been to Bruges? Did you have better weather while you were there?!

13 responses to “The Perfect Stopover Between Paris and Amsterdam: Bruges, Belgium”