Berlin might have been my least favorite city on my month long European backpacking trip (catch up on Paris, Versailles, Bruges, and Amsterdam).  That is to say that I didn’t dislike it, but I didn’t love it either.  I could live in Berlin (because I think I could live just about anywhere) and still be happy, but I feel like it might be one of those cities that it takes a while to warm up to.

* I did love the street art though!

I caught a very early train from Amsterdam to Berlin. I should have arrived at my hostel around 1. Instead there were problems with the train and the conductor told me and another girl that we should go catch a simple city train instead of waiting for the train to leave.  This meant that we had to go pay for an extra ticket and figure out how to go to our respective hostels from this new, unplanned station. It added an extra hour onto my journey because I ended up buying a Berlin Pass and arranging timed entry tickets to the Pergamon and New Museum for the next day.

Anyway, I arrived at my hostel just as my friend from Valencia was about to leave.  She knows that I am a very organized person who should have already arrived at my hostel if there were not any problems.  Her couchsurfing host was with her and they were ready to go explore.

I quickly dropped my stuff in my dorm and joined them. We visited the base of the TV Tower which was only a couple of blocks from my hostel and then we made our way to Markethalle Neun.  Our intention was to arrive right at the beginning of street food Thursday, but we got there at 4:30 instead of 5:00. They were very serious about starting right at five because they rang a bell at 5 o’clock exactly so that the vendors knew it was time to sell. It was a very nice market (I loved the pork belly sliders and fresh oysters), but I am used to street food being a bit cheaper.

From there we went to the Berlin Wall and enjoyed the art before my friend crashed and we had to go back to our respective beds. 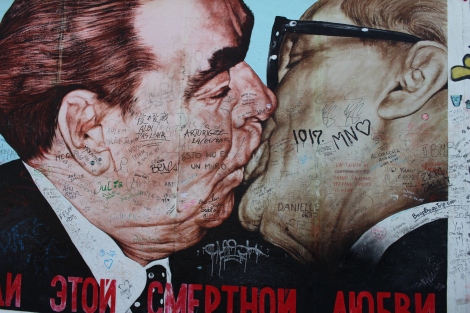 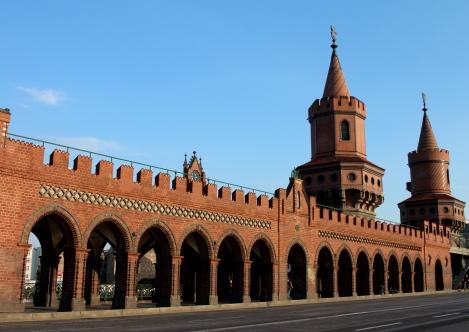 I enjoyed the free drink and great rooftop view at my hostel: 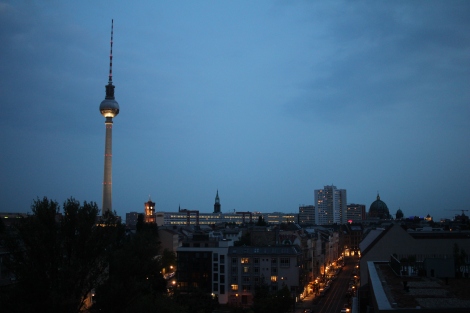 A view of the TV tower from my hostel rooftop bar

I was very happy when I was able to show up at the Pergamon, wait for my friend, and then just walk right past the line of people waiting to go in because I already had my ticket! Timed tickets are amazing! The Pergamon turned out to be one of the most memorable museums I went to in Europe. Despite the fact that it is under construction, I was still amazed to behold the vibrant-blue Ishtar Gate and the many ancient sculptures.

The Market Gate of Miletus at the Pergamon- This gate is just so massive!

Part of the Ishtar Gate at the Pergamon Museum

The New Museum was lovely too, but felt very similar to other things I had already seen.

A short walk away was the Berliner Dom which is a big church with lots of stairs up to a pretty decent view.  I was amazed at all of the scaffolding I saw, but it fits the city since it is known to be constantly changing and developing. 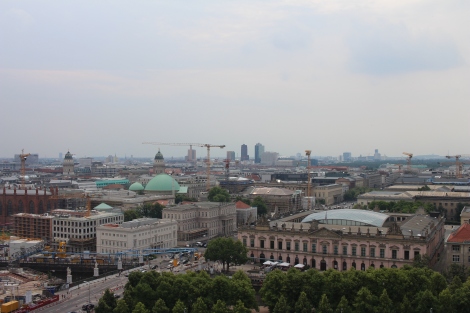 The Berlin Skyline is full of cranes!

After that I walked to the Bradenburg Gate and the Holocaust Memorial and arrived just as it was starting to rain.

The Holocaust Memorial site with its 2,711 concrete slabs

My friend met up with me again to go on a street art tour.  If I wasn’t charmed by the rest of Berlin, I do have to say that the street art was my favorite in Europe! 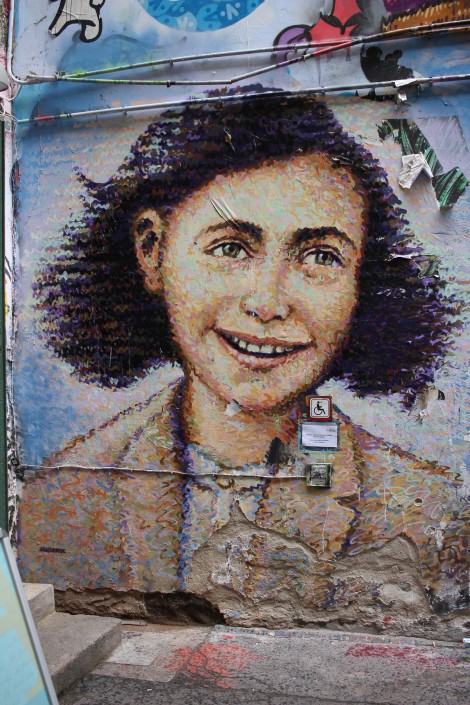 I didn’t make it to her hideaway in Amsterdam, but I was blown away by this Anne Frank street art 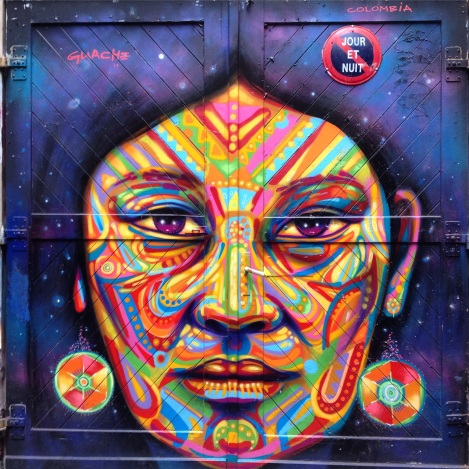 I immediately recognized Guache’s work from the streets of Bogota, Colombia

After walking all over Berlin my friend and I met up with her Couchsurfing host at a gay pride parade. It was pretty cool because a day or two before the US finally made it legal for same sex couples to get married in all 50 states. There was even a float to commemorate the new law!

Then we squeezed in the Jewish History Museum which was very modern with many sound clips, video clips, and interactive exhibitions.  My favorite was a piece called “Fallen Leaves” by Israeli artist Menashe Kadishman, and the Garden of Exile. 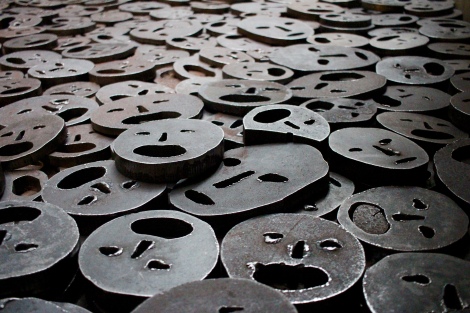 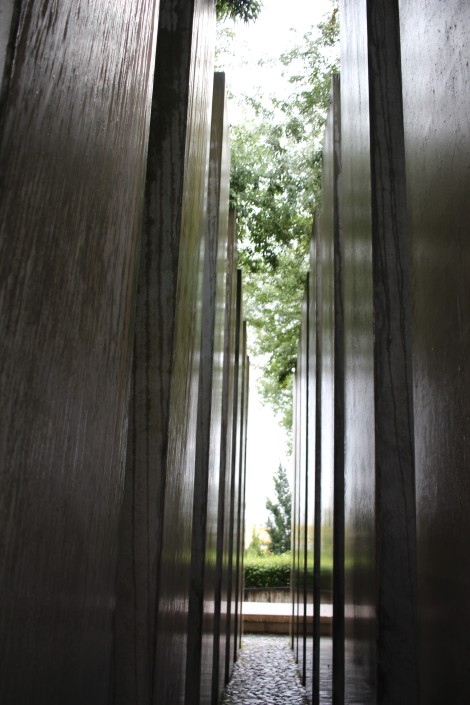 From there we raced back for our timed tour of the Reichstag Building and its pretty awesome environmentally friendly glass dome.  I had never been in a building that had moving parts to take advantage of the daylight and thus reduce the energy usage of the building! 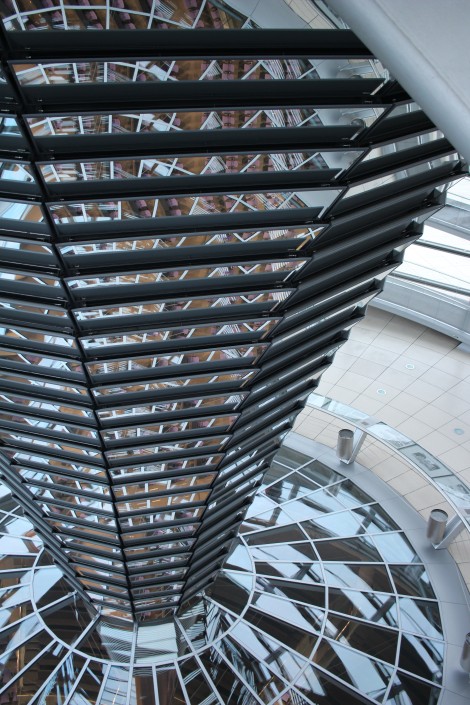 I was put off by the tour staff guys at the Reichstag because they were running late and wouldn’t let my friend and I sit on the floor while we waited (we had been walking for about ten hours at that point!), but I do have to be semi grateful because they let me through security by showing only a color copy of my passport since my original AND my driver’s license were at my hostel. Note: carry your passport if you have tickets to the Reichstag (and you do need a timed entry if you have any hope of getting in during high season).

Comment below! Have you been to Berlin? What did you think?  Did you love Berlin?  What are some other places with great street art?

9 responses to “3 Days in Berlin, Germany”