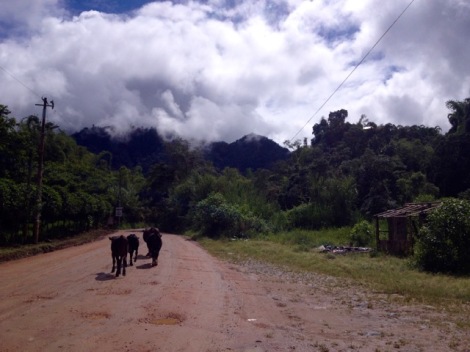 I woke up seemingly before anyone else at my hostel at 6AM to catch a prearranged taxi to the bus station. The night before a girl I met at the hostel’s terrace bar/restaurant said that she would join me so we could share taxi costs, but she had too many drinks and overslept (I later learned). So I paid $10 for my taxi ride to the Ofelia bus station which is on the other side of town, about 45 minutes away.  😦  I brightened up once I realized that my bus ticket to Mindo (a trip that is about 2 hours one way) was only $3.10!!

I arrived in Mindo at about 10AM which was perfect.  I was the only tourist on my bus and hardly anyone else was on the street. I felt like I had the town to myself.  I immediately went to the tourism office (just off the main square) to get a free map from them and to ask how long it would take for me to walk to the butterfly farm and then the zip line places.  The lady there said it was an easy walk that I could easily do on my own, so off I went! 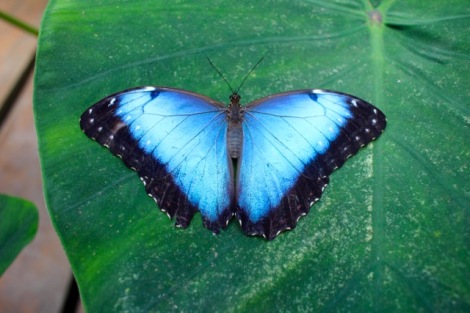 My fav pic that I took at the butterfly hosteria: Blue Morpho Butterfly

The walk from the plaza to the Hosteria de Mariposas was unpaved, a little muddy, but pretty flat.  The lady said it was about 2km and it took me only 20 minutes to get there.  I arrived at about 10:30 which was the perfect time because there were only two other people in the garden! I stayed for about an hour because toward the end a tour arrived with quite a large group and it just wasn’t the same. 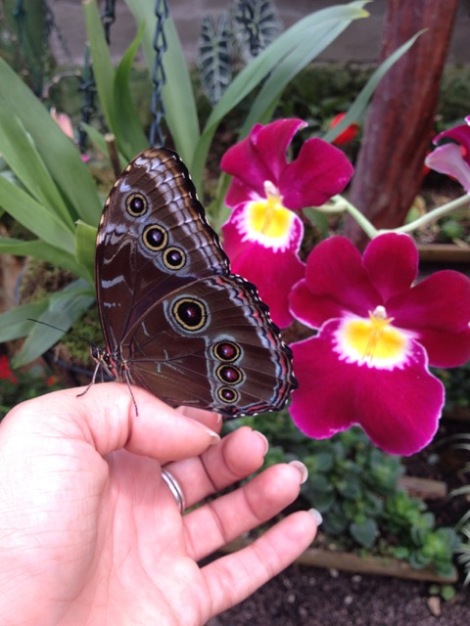 I loved the orchids everywhere too

Tip: spread a little banana (provided by the hosteria) on your hand and the butterflies will flock right to you!

Butterfly chrissalyses: so cool to see the different kinds 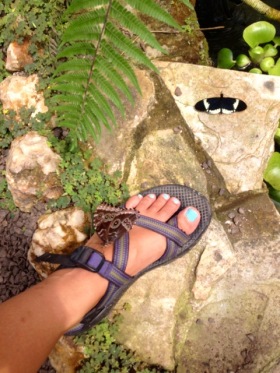 They also loved to land on my feet

The woman working the desk at the butterfly place said that I could walk to the zipline business in 25 minutes.  While I might have just barely made that time frame, I think it is important to mention that most of it is uphill on a twisty road which is mostly upaved and covered in gravel.  I arrived sweaty and out of breath.  Thankfully one of the guys on staff refilled my water bottle for me!

I was so glad I only chose the 3 cable option!!! First of all, I was by myself so after paying for the entrance fee and getting suitted up, the worker sent me over to join another group that was midway into the safety spiel (which was in Spanish).  I missed most of it.  Everyone else seemed to be enthusiastic so I just went with it. 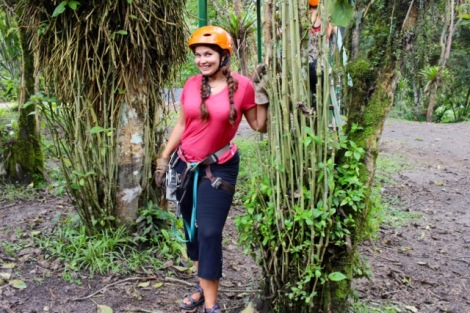 I could tell that it was pretty straight forward after watching the first ten people in their group go across so once it was my turn I followed their example and made across the first cable.  Scary, but not too bad. 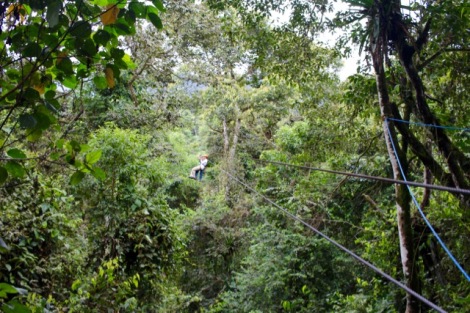 Just before it started raining

Then it started raining!

The second cable was a bit longer and a bit faster because the cable was starting to get wet.  I started to go pretty fast at the end and I wanted to go with the guide for the last one because it was the longest.

However, because I was by myself the rest of the group kept going after getting me set up and there was only one guide to take me back. He had to go ahead of me leaving me to follow him.

At this time it was raining a bit harder and the cable was completely wet.  I went zooming toward the end and just felt like I would never stop because it was a 400 meter cable.  It went super fast! If you are a speed demon, try zip lining in the rain!

I was soooo thankful to get back to solid ground and I was so thankful that I didn’t have EIGHT more cables to suffer through!!  Me knees were wobbly and I was not up for a walk back down the hill and into town so the helpful worker who filled my water also called a taxi for me ($4 but I was able to split it three ways thanks to other tourists that didn’t want to go on the zip lines after all).

After all the hiking and zip lining I was ready for lunch.  I had heard good things about the Beehive and saw it on the way into town so I stopped there.  They had a set lunch with soup, trout, rice, potato wedges, salad, patacones, juice, AND a brownie! While it was the most expensive set lunch I had had on the whole trip it was also the best by far. Also, I was able to sit at a table overlooking a river with several hummingbirds flying around me. Absolutely worthwhile if you have the time!

Once I was finished with lunch I followed my map to El Quetzal Chocolate Tour.  It was only a block from the main plaza so you can’t get lost.  I was just in time to pay the $10 to join a tour (most expensive chocolate tour I’ve ever taken!).  The guide took us through bean to final product, let us sample eight different bars, try some pure cacao syrup, some cacao syrup with ginger syrup, some cacao flavored BBQ sauce (yum!), a vegan cacao brownie, and some cacao nib tea.  I enjoyed the tea that I bought some to take home with me!  I enjoyed this tour very much.

seperating the fruit from the shell

What a chocolate bean looks like before it is dried out

After my chocolate tour I still had a little extra time so I wandered around, journaled a bit, and then waited in the bus with a book for a few minutes.  I got one of the last busses out of town at 5PM.  I was able to accomplish everything I wanted to do in the one day I spent in Mindo, but I can see how it would be an amazing place to just hang out and relax for a few days (even if it is one of the more expensive spots in Ecuador).

Have you been to Mindo? Are there other must sees that I missed?

7 responses to “Mindo, Ecuador: the Adventurer’s Day Trip from Quito”