My friend Rose told me that there are 8 million people in Bogota. Indeed, when I was at the top of Monserrate, I could not see where the city ended! There are many different districts in Bogota, but my hostel was in La Calendaria so that is mostly where I stayed.  I was perfectly content to stay in this historic district and enjoy seeing beautiful architecture everywhere I turned, but I’ve also heard that Chapinero (lots of nightlife) and La Macarena (more bohemian) are good places to try out.

I visited Bogota for a few reasons: I have friends who live there, it was much cheaper than Cartagena (because of Semana Santa), and their were plenty of cultural activities to keep me busy. Also, it has drinkable tap water! After five years of drinking only bottled water I took full advantage!

Some of my other favorite things about Bogota were:

I liked this Botero sculpture

The Museums: Botero, Gold, and various Art museums provided hours of entertainment for me. The Gold Museum was definitely the best in the city. It is well organized, has beautiful work, and there are English translations. The Botero Museum kinda blended into this block of museums, but I really loved seeing his sculptures which were tucked away into a room of their own. 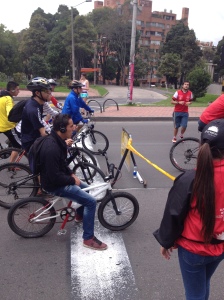 La Ciclovía– Rose took my friend and I to La Ciclovia which is a huge set of streets that are blocked off of traffic. Apparently the city has been doing this event every Sunday. We only walked 50 blocks of it, but I have heard that it goes the length of the city. We saw families, teens, and groups of adults cycling, roller blading, running, and walking this strip. 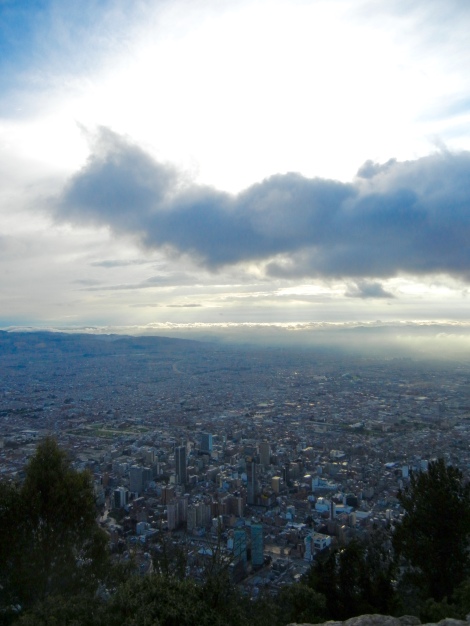 The Bogota skyline as seen from the top of Cerro Monserrate

Cerro de Monserrate – This is the giant hill that overlooks the city. I met some people in my hostel that said they were able to climb up the many stairs to the top in about an hour. Considering that I was out of breath from carrying some groceries up the hill to my hostel, I didn’t want to risk passing out on the trail due to altitude sickness. Instead, I recommend that you take the funicular (a little mini train that moves through a short tunnel up to the top) or the teleferico (a tiny cable car crammed with people). I liked the teleferico the most because the views are better, but the line is also longer. Sunday both the teleferico and funicular are half priced! 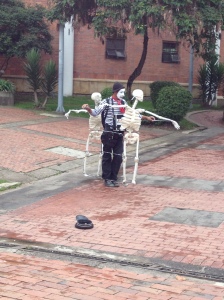 Usaquen Market– My friend Rose took us here for a few hours after the Ciclovia. There was a little plaza full of stands, but my favorite part were the little alleyways crammed full of stands and people admiring the artisan wares. We ended up at the flea market with similar stuff but we were told that when it isn’t Semana Santa and it isn’t raining cats and dogs that there are even MORE stands out. My friend got 90% of her shopping done at this market.

Explore the city– I recommend doing the Bogota Bike Tour the first day or two you are in town because you will really get a lay of the land. We didn’t make very many stops, but our guide was a graffiti artist who helped us to see some off the beaten path sights like Tejos (a game involving throwing a disk at a pile of clay while aiming for little triangles filled with gunpowder all the while drinking some beers) and the Garbage Museum. My favorite part was visiting Café de la Fonda which roasts its own beans. 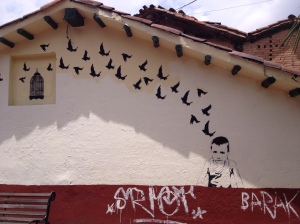 The Bogota Graffiti Tour was far and away my favorite activity in Bogota. I love good street art (the Boca neighborhood in Buenos Aires is the only other time I’ve visited somewhere so filled with art), and the tour guides are really passionate about what they do. I will write a follow up post about this tour so I can post some pictures of my favorite pieces. 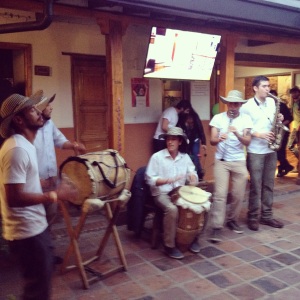 The first band to play for the Masaya Hostel anniversary party

Where to Sleep: I stayed in the four-person dorm at the Masaya Hostel in La Calendaria district.The first night we were there it was their anniversary so we heard several live bands! Great hostel in a fabulous location on a couple of blocks from several main sights!  I loved having my own locker, a lockable drawer under the bunk bed, curtains on every bed, my own reading light, and an outlet for every bed. My friend stayed in a lovely private room and enjoyed it too (it even had a flat screen TV and a closet full of hangers!). It was also the cleanest hostel I’ve ever stayed at. Also I met cool people every night in my dorm. A major highlight of my stay at the Masaya was discussing my half formed travel plans to backpack the Galapagos next December with Ngaire from Kiwi Footprints.

Please comment: Have you been to Bogota? Would you return? What was your favorite thing to do there?

3 responses to “Bogota the Beautiful”