One of my most memorable experiences in China was getting a tattoo in the hutongs of Beijing.

Here is my journal entry about my one and only (for now) tattoo and some pictures documenting the experience.

I got a tattoo! One of my coworkers met a guy who had a tattoo done so he got one and tried it out. No problems. So he brought us to Cha Cha. 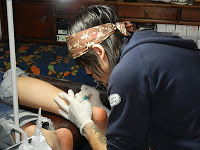 I have wanted to get this Tolkien quote tattooed for about a year now, “Not all those who wander are lost”. I had previously thought that I would get little feet tattooed from the inside arch of my foot up to the quote but I thought those were unnecessarily distracting in the end.  The quote is meaningful enough on its own. It makes me think of so many things: 1) traveling is a type of wandering that is good for you even though you might feel lost sometimes; 2) there is more than one right path in life; 3) even though I am unsure of the decision I made to come here instead of staying with a man I love I am still making a choice that will propel me further along my path in life; 4) I am sure that some people see me teaching abroad as a way of escaping the “reality” of life in the US but I am doing exactly what I want to be doing; and 5) we must forgive those who seem to be making a poor choice because they are not lost either but simply wandering along on their own path in life.

First time I actually saw the recycling process in Beijing

Getting the ink and stuff set up 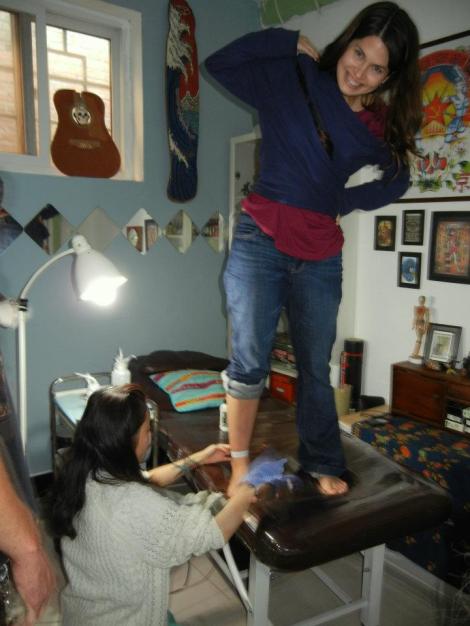 Getting the placement just right

“Not all those who wander are lost”

One response to “Getting a Tattoo in the Hutongs of Beijing”