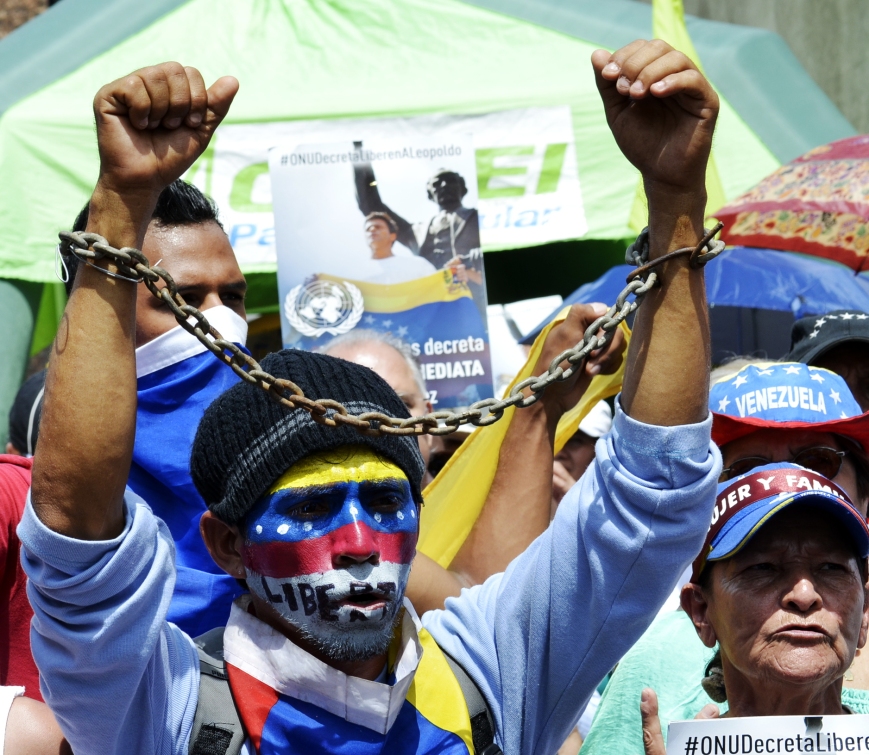 This photo is from the protests that happened here in Venezuela in 2014, I hope that the protests do not happen again (photo cred Wikipedia Commons

Yesterday was my birthday, but instead of enjoying the day, I spent a lot of time reflecting on my experience here in Venezuela. You see, my friends who arrived at the same time as me in Venezuela went through a horrible experience that really brings home the current situation here. It really made me wonder: why do expats stay in difficult places instead of leaving for greener pastures? What makes a place dangerous for expats?

During the last school year, I was held up at gunpoint in an attempted robbery during broad daylight in a nice part of town, but my friends had something happen that is even worse. At 7:30 in the morning my friend was walking his dog while carrying his two-year-old in our neighborhood. A couple buildings down the street from their apartment (and half a block from my apartment), he was approached by two guys on a motorcycle who asked for directions. When he didn’t know where the building was, they each pulled guns on him and ordered him to empty his pockets.

Thankfully my friend was just walking the dog so he only had a nearly empty wallet, no cell phone, and his car keys were at home, but they still took his wedding ring. They also took something even more valuable: his sense of security. After having multiple guns directed at you and your TODDLER, in broad daylight, a couple buildings away from your own apartment, how can you ever feel safe in your own neighborhood again?

Coming here you should know that Venezuela has 8 cities on the list of the 50 most violent cities in the world list.

One thing that terrifies me more than a potential robbery is the idea of having a simple accident and not being able to get medical help. When there are no antibiotics, medicines as basic as aspirin are not to be found, and there is a high probability that there will not be electricity or water available at the hospital, I am terrified that if I were seriously hurt I would not get the help I need.

Every year I bring simple over the counter things like Nyquil, Pepto, and Advil, but now I will be bringing a serious first aid kit with me. Maybe I’ll bring two first aid kids, one for my car and the other for my apartment. What should I put in it?

Right now I am teaching a unit on basic economics to my third graders, and unlike students I’ve had in the past, my kiddos knew what scarcity meant right away. It is a way of life here.

New teachers always ask what should they bring to Venezuela. I make a handy packing list (mostly for myself) each year, but I was joking with a friend the other day that people coming here should just try to bring everything they can. Too bad that there is always an airline embargo during the summer months so we cannot bring more than the two allotted suitcases, which cannot be overweight. I’m going to carefully think about what I should bring with me and what I should try to ship to myself.

The past few months stuff is getting harder and harder to find. Toiletries, medicine, clothing, makeup, food items are all things that I am going to ship here.

Little Support from Friends and Family

I’m sure I’m not the only one here who gets emails and Facebook comments from concerned friends and family members. Minutes before meeting up with my friend who recounted her family’s terrible robbery experience, I had read an email from another friend asking me to leave Venezuela. This is not the first email I’ve received on this matter. I have intelligent friends and family who read the news and they know that Venezuela is very unsafe.

Despite friends being involved in an armed robbery at the plaza I go to multiple times a week, I’ve always felt rather insulated from the violence within my neighborhood. It is a very residential neighborhood with friendly people. I’ve always thought that the security guards at every building would do something if they saw an armed robbery happening ten feet away, but my friend said that the guard did NOTHING.

I’ve said before that the media was making the issues here seem worse than they are. Now I would say that they are pretty accurate. My friends are right; this place is dangerous, volatile, and difficult to live in.  Friends and family want to help, but they are all in another country so there isn’t much they can do.

So why am I returning next year?!

I signed a contract, and to me, that means something. It is only a one-year contract, and it seems like I can deal with things here for one year more.

I love my job! I have fantastic resources, the largest classroom library that I’ve ever had, freedom in the classroom to use my professional judgment, a full-time classroom assistant, less than 20 students in my class, two planning periods each day, supportive admin, a beautiful campus, and fantastic co-workers. Sometimes I think I shouldn’t leave such a great workplace because I might not find another school that I love this much.

**If you know of a school as awesome as mine, please leave a comment below!**

The students at my school/work are fabulous. They are sweet and caring, and they want to do their best. Someone has to teach them. The local teachers are still here (though it seems like about half of the local staff at my school is leaving the country). I still have friends here and if they are staying I want to stick it out with them.

I will say it again and again: the beaches here are incredible. I live an hour from fantastic beaches and I try to go at least twice a month. When things get crazy here I go there and breath in the peace found within nature.

I will pay off my student loans next year, which will make my choices for my next teaching job more about the fit between the school and me and less about the money. I don’t know of other countries where I can live the way I do on only $200 USD a month.

Cuban salsa is alive and well in Venezuela. Now that I have found another salsa academy I look forward to every weekend so that I can practice and dance with other people that love to dance as much as I do. When they closed down the park that we were practicing in due to no electricity and security concerns we moved the practice to someone’s house. Whenever I can dance six or more hours a week I am pretty happy.

While it is difficult to find flights in and out of Venezuela sometimes, Venezuela is a good jumping off point to explore Latin America. So far, since moving to Venezuela I have visited Argentina, Uruguay, Colombia, Peru, Bolivia, Aruba, Curacao, Dominican Republic, Trinidad, and next year I will go to Cuba and Chile. I know that if I got a job in another country in Latin America I would be able to continue my travels, but for now, I’m making Venezuela work for me in this department.

I have no delusions that next year will be a walk in the park. I expect it to be difficult and trying at times. I can only hope for the best and hope that I will stay safe. Wish me luck and (if you are so inclined) pray for peace.

Please comment: Have you ever stayed in a difficult situation? What made you stay for another year?  What finally made you move on?

18 responses to “Why do Expats Stay in Difficult Places?”

We are having fun living with my brother and his kiddos in the ‘burbs! This morning my little man woke up and said, “mama me want go home (to Indonesia)”, but when I reminded him that he gets to play with his cousins he said, “Yes! Play with cousins! No go home!” I still hope that things will have calmed down by July so that we can make it back to Indonesia before school starts again! #nomads #expatlife #ilovemyfamily #momlife #teachingwanderlust
I feel so lucky to be called “Mama” by my sweet boy. Today we were able to visit one of my favorite parks, scoot around on those little hills, watch some geese, and look for ducks on the lake. Great way to spend Mother’s Day!
We moved in with my brother and his family so my little man could have more space. Life in the suburbs means grassy spaces, trails, and time with his cousins. #family #longwalks #play #outside #nomads #teachingwanderlust